The Legendary Starfy on Game and Player 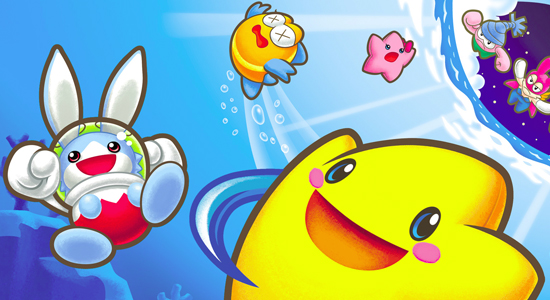 The first to North America, and long overdue.

he Legendary Starfy for the Nintendo DS is the first of the Starfy games to reach North America — an arrival which is, quite frankly, long overdue.

You play as Starfy, the Prince of Pufftop, helping out your new friend Bunston recover his memory. Along the way you'll have to stop the mysterious foes who are pursuing Bunston, as well as encounter a wide range of friendly characters who will assist you on your journey. The story is pretty basic fare, which makes it well suited for the DS's target audience. Major plot lines play out in between each new area via an animated comic cutscene. The idea is to make things as simple and visual as possible for kids to enjoy. 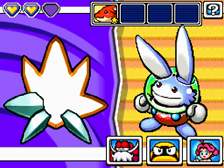 It's up to the Prince of Pufftop
to help Bunston recover his memory.

Starfy controls very well. Movement feels very natural and is quite easy to get used to. New abilities become unlocked as you progress, and you're given a brief video showcasing exactly how the new move is pulled off. Given the game's platformer world design some of these abilities are essential to reaching treasures that are hidden in past areas.

As for the level design, it's really quite smart. It allows for basic level progression which is well suited for those who don't really play a lot of games, while at the same time offering plenty of secrets and challenges for more advanced players to explore. Each new area introduces its own unique puzzle aspect to it, ranging from moving rocks to having to break up chunks of ice. None of the puzzles are particularly challenging to figure out but there is enough variety in them that they all aren't of the same structure — in other words, they all don't have a key/lock set-up.

Graphic and sound design is very kid-friendly. Colors are bright and vibrant, and the animations for all of the characters are very smooth. Music is very lighthearted; almost of a whimsical nature. It may not be very memorable but it definitely sets the mood for the type of game that this is.

Starfy offers a few other additions to just the main story mode, including several mini-games. All of them are controlled via the stylus and they actually are pretty fun to play. More of these become available as you progress through the main game. As well, there are a few levels in the main game that can be played co-op. In these stages, the other player gets to play as Starfy's sister Starly, and as most of these stages tend to be boss fights, the team-up makes them a lot easier. 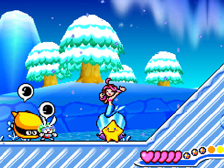 Each new area introduces
its own unique puzzle.This actually leads to the only real major shortcoming to the game: bosses are very difficult, which can easily become very frustrating for a younger player. There was another issue that rose up, albeit a very minor one. There are constant minor references to past games in the Starfy series. While these references really don't detract from the main story they do come across as though you're missing out on something.

During my playthrough of the game I came away with the impression that The Legendary Starfy felt very similar to Kirby's Dream Land 2. Both games have a transformation aspect to them, and both games allow for two levels of play. There's the very basic playthrough of the game, where you just encounter the main story, and that's it. Then there's the in-depth level of play, where there is a ton of exploration available and really appeals to the more dedicated players who want to find all of the secrets in the game. The Legendary Starfy should really appeal to kids, but has enough depth for adults to enjoy as well.