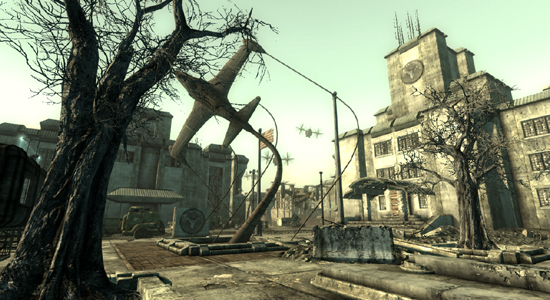 hey say that good things come in threes, and the new Broken Steel DLC for Fallout 3 certainly lives up to that adage. The new content is simply massive, not just in terms of the new missions that you get but more of what it does to the game world.

Broken Steel brings two major additions to the game; it raises the level cap to 30 and removes the game's original ending. With the rise in the level cap come new level perks such as the Puppies perk, with allows you to replace Dogmeat with another dog should he ever die; or one of several alignment perks which allow you to instantly switch to extreme good/evil or neutral. As with the other perks there's nothing there that's absolutely necessary to get, but they certainly will help you out along the way.

Hard at work, to whatever end:
Project Purity was a success.

The new content picks up right after the original endgame. You'll still get to see your desired ending from before and you'll still get to hear Ron Perlman's narration of your actions in the Capital Wasteland, so those of you who are afraid that you'll miss something if you download the new DLC have nothing to worry about. Things start off with Elder Lyons filling you in with what's happened while you were out: turns out that Project Purity worked (with or without the FEV) and the Brotherhood has started to distribute water throughout the Wasteland. They've also been systematically wiping out Enclave bases with the help of Liberty Prime. Elder Lyons has a plan to take them out for good and you're signing up for the ride.

From here you have free rein as to where you want to go and see how activating the purifier has changed the wasteland. Depending on your actions you'll either see lines of people trying to get pure water or rows of the sick and dying looking for help. You'll see water caravans wandering around and as a shocking twist you'll see that Mirelurks are not fans of pure water. There are several new side missions available; depending on your earlier actions, some may not be available at all. As for the new main quest, you're first tasked with assaulting a relay station, and after that, finding a way to Adams Air Force Base to fight the Enclave in their base there.

Repeat, this is not easy.The first thing that players will notice about the new content is that it is hard. Several new enemies have been added to the game who will challenge even experienced players at every point. You'll even see them in random and respawning enemy encounters, so wandering the Wasteland is no longer as safe as it used to be. This jump in difficulty should be seen as a great boon to old school Fallout fans and those who felt that the pre-DLC game was far too easy. There are new items and equipment available, but unlike the first two DLC packs you'll have to earn all but one of the new items. Be prepared to work to get these new items, but take note that they will be worth the effort.

I do, however, have two issues with the new content. The first is that the new endings do not have the same sense of closure and satisfaction that the original did. You go through all of that effort and what you get is so anti-climatic it was just a bit of a letdown. My other issue is that with the new level cap it is quite simply impossible for players to reach that cap without a character that has maxed-out stats. It defeats the purpose of making things challenging, and removes the incentive of giving players a free hand in their own development since everyone's going to end up with the same kind of character anyway.

Otherwise, the new Broken Steel content is something that anyone who's spent a fair amount of time exploring the Capital Wasteland should try. It won't be easy, but I think that few people will back down from such a rewarding challenge.