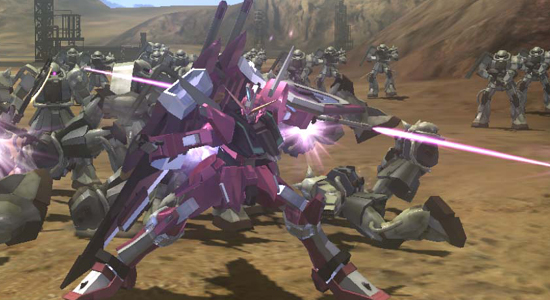 The same formula plus additions and improvements.

DW: Gundam 2 is broken up into two main modes, Official Mode and Mission Mode. Official Mode follows the main storyline of the original Gundam series set in the Universal Century storyline. In it you get to play as the five main characters from the three original core series, following those series as well as Char's Counterattack.

Original Mode in DW: Gundam 2 is far more detailed than the one found in the first DW: Gundam. There are more missions for each character, and missions are fairly close to the original material. There are little write-ups of other pivotal events that occur between battles, serving as a good refresher for those who've forgotten the original storyline or as a good introduction for those who have not had the chance to see Gundam before.

Mission Mode, the bulk of the game, is where most players will end up spending most of their time. Here you'll find all of the other pilots in the game. Missions lay the foundation for enabling all of the various Gundam character to interact with each other. Online missions are multiplayer and competitive, requiring players to go after destruction points or accomplish time-based goals. Nothing particularly special about the online mode; it's a shame that an online co-op function couldn't have been included for Mission Mode.

Graphically the game is a step up from its predecessor. Models for the all Mobile Suits look absolutely great, lacking the beaten-up appearance from the first game. Sound effects are the same as before, they come across crisp and clear, although the voice work does leave a bit to be desired, with several lines being either very corny or inaccurate translations from the original Japanese. Unfortunately, there apparently wasn't an option to use the original Japanese voices, so Gundam purists are going to have to settle for less. In-game music is a bit of a letdown, especially with the reuse of several pieces — and that just comes across as being lazy.

Among new features are the same things added to every Dynasty Warrior game: more characters. Pilots and Gundams from other series make their appearances, sure to appease just about any Gundam fan. Also new to the game are battles with giant Mobile Armors. These fights are challenging and take some time to get used to. While mostly occurring at the end of a mission, they really change the way the battlefield flows.

You can pilot whatever you fight.There are a few gameplay tweaks, too. The first is with the part system. Parts are now set to the body parts of your mobile suit, but this time they are accessible by any character. Meaning that if, for example, you unlock a bunch of parts for the Zeta Gundam as Kamile those parts can be used by Judau and Roux whenever they end up piloting the Zeta Gundam. New Mobile Suits become unlocked ass soon as you collect all of the parts for them — what this means is that you'll even be able to pilot the mass-produced Mobile Suits that you'll be spending a lot of time destroying. While likely not something that most players will end up using, this is an excellent new twist.

Another change is the way that Musou attacks are handled. The type of attack that you pull off is no longer tied to the level of your Musou meter, but the context that you are in when you try to unleash a Mosou attack. This allows for a lot more tactical variety. The only other really noticeable change is that DW: Gundam 2 feels much more difficult than the first game. If you want those victories you're going to have to earn them, though that makes for rewarding gameplay.

If you haven't been a fan of Dynasty Warrior games in the past, then you likely won't be a fan of this one. But the main core gameplay is still intact, so if you do enjoy these games or are a Gundam fan you're likely not reading this — you're already playing the heck out of it.