Killzone 2 on Game and Player 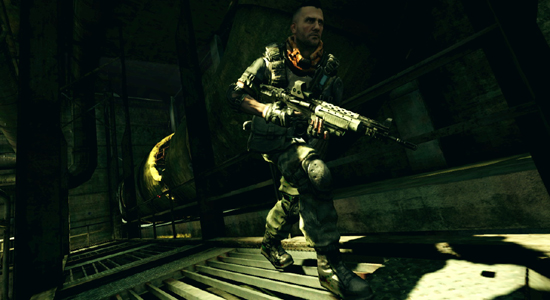 Not the system-seller some thought it would be.

illzone 2 continues the war against the Helghast, begun in developer Guerilla Games' previous two Killzone games — only now the battle has been brought to the Helghast's homeworld. While Killzone 2 may be a very good title, it doesn't quite live up to high expectations.

What Killzone 2 does live up to are expectations for its graphics. This is one of the most beautiful-looking and detailed titles available. Whether it's seeing a dust cloud blow by, or the amount of detail in a gun, or even all of the little details that have been put into an area, players will definitely find something that they'll stop to take a closer look at.

Down to the little details,
this is a beautiful title.

If the game does fall flat anywhere graphically it's in the fire effects, which, when compared to other games really aren't as spectacular as they could have been.

The campaign covers the assault on Helghan, meant to capture the Helghast leader Scolar Visari and end the war quickly. As per the old adage, nothing ever goes according to plan and about halfway through the campaign you'll have to take out the Helghast lightning defense grid so that you can attempt to fulfill your primary mission. The campaign covers several areas, each with its own unique look and feel — the more interesting-looking ones encountered in the latter half of the game. Level design is fairly linear, with some levels containing some wide-open battle spaces; or a sit-and-defend point, where you're assaulted by several enemy waves.

As for the enemy themselves, there's not too much variety in them; they mostly differ in what kind of weapon that they carry. However, when do you encounter a different enemy the game makes sure that you're aware of it — the end result being some of the most enjoyable gunfights in the game. They are rewarding solely on their sheer difficulty and, in one instance, rewarding because of the weapon you gain afterwards. If there's one thing that's lacking, there's not nearly enough snipers in the game.

Sound design for the game is excellent. Music fits the situation that you're in, but there aren't any pieces that are nearly as dynamic as the opening theme, which is a bit disappointing. Sound effects more than make up for this. Whether your footsteps or the firing your weapon, the sounds of Killzone are very well done.

Controls, however, are another story. Aiming feels very sluggish when you're shooting from the hip, and overly sensitive when you're staring down gunsights. As a result, aiming never feels very natural, as though you are fighting with the game to shoot at what you want to. Worse, weapons don't feel very accurate. Combined with the finicky aiming system, guns waste ammo while you're trying to kill enemies.

Killzone also implements some Sixaxis controls, so you have to rotate the controller when you have to open valves or set explosive charges. The most interesting — and the most innovative — thing that Guerilla has done with the Sixaxis controls is to tie them to the sniper rifle. When you look down the scope, the controller's position becomes the zero point, so any movement in turn moves the crosshairs. It adds a new layer to gameplay; regrettably, this is only limited to the sniper rifle.

The longevity of any game these days is based on how well it's multiplayer is, and I'm happy to say that Killzone 2 has a very strong multiplayer component. There are five different game types to be played across eight different maps. While that may not sound like a lot of maps for a game, keep in mind that the maps themselves are fairly large and have a lot of intricacies to them. All of the maps are based off of levels from the campaign and all but a few of them are based off of the same geometry; despite this, the maps are balanced and allow for competitive gameplay.

Bring the battle to the Helghast.
When you can hit them.What's also interesting is that all five game types can be played during a single multiplayer round, points are awarded to the team who wins each gametype allowing for an overall winner to be decided. There is also a ranking and challenge system in place, similar to the Call of Duty series and Rainbow Six Vegas. Points for the ranking system are earned through standard means such as kills and completed objectives. Challenges allow you to earn new benefits for the available classes. Some are quite difficult, and to earn benefits you have to complete the challenges several times.

There are only a few problems I found with this. First, all of the classes and weapons are available only to the higher ranks. Lower ranks only give pointless bonuses such as being able to form squads during a match. This is alleviated somewhat by the fact that it doesn't require much effort to move from rank to rank. For an average player this shouldn't be much of a challenge. Second, some of the challenges have either very high or unrealistic objectives to accomplish, such as ten melee kills in a game. While that may be possible in longer games, during shorter matches, completing some of these objectives is a downright pain.

With its share of flaws, Killzone 2 is still a very good game. It's not as innovative as some first-person shooters, but competently developed; one that players should check out, but not the system-seller that many people thought it would be.