Fallout 3 DLC: The Pitt on Game and Player 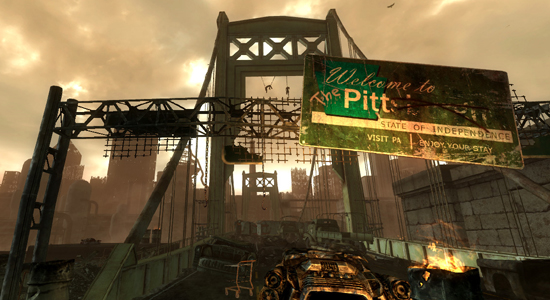 he newest content update for Fallout 3 is out, and those who didn't find Operation Anchorage fun are definitely going change their attitude once they play through The Pitt.

The Pitt takes place in the remains of Pittsburgh, and it's the exact same place that knights from the Brotherhood of Steel say they passed through when they first came to the Capital Wasteland. Things have gotten a bit worse since the Brotherhood was there last. The inhabitants are diseased and the majority of them are slaves, forced to work in the surviving steel mill there. Throw in roaming bands of Wildmen and Trog mutants and only the most seasoned of Fallout 3 characters will have an easy go at this.

The new series of quests begins with a distress signal. Reaching the source of the signal you'll meet Wernher, who'll tell you about the slaves in the Pitt and how they're being ravaged by disease.

Stripped to the wire: to survive,
you'll have to explore.

The overlords of the Pitt have managed to find a cure for the disease and are keeping it away from the slaves; Wernher wants you to steal the cure so that the slaves have a bargaining chip that they can use for their freedom.

As with all things in the Fallout universe things are never as easy as they appear. To get into the Pitt you're going to have to disguise yourself as a slave. After a quick trip to acquire a Pitt slave uniform you're ready to make the trip. Once you finally manage to get to the city you'll have all of your equipment taken away from you for a time. I'll try and keep the rest of the questline here spoiler-free, but will mention that you can expect to run into some arena battles à la Thunderdome, as well as a very intriguing moral twist that you'll have to act on towards the end of the quest. All in all my time in the Pitt lasted for about 6 hours.

Similar to Operation Anchorage, The Pitt places characters in a situation wherein they start off with absolutely nothing. Most players likely haven't been in this situation since they first left Vault 101. This really enforces the post-apocalyptic mentality and it's going to force players to think on their feet if they want to be able to survive. It was a very rewarding game experience to be able to climb back to where I was before simply by working with the few items that the game gave me.

You'll be faced with a moral dilemma.The environment in the Pitt can only be described as being dirty, even when compared to the other environs in Fallout 3. Everything in the Pitt is covered in a layer of grime and dirt. This really reinforces the industrial nature of the content. The steel mill itself is another place entirely with practically the whole place being lit up by molten metal — definitely something that people haven't seen before in Fallout. As with prior content, The Pitt gives players some new weapons to play around with, such as the autoaxe, which looks like a vicious version of a concrete saw. There are a few other interesting items to be found but you're going to have to earn them.

For some, the main draw of The Pitt will be that it shares the exploration aspect the feature release has, but which Operation Anchorage lacked. If you want to survive you're going to have to explore the area looking for equipment. In Operation Anchorage players couldn't explore, and didn't have to — they were given everything that they needed at the outset. For those who were disappointed with the first set of DLC and those who are still enjoying their time in the Capital Wasteland, I strongly recommend The Pitt.