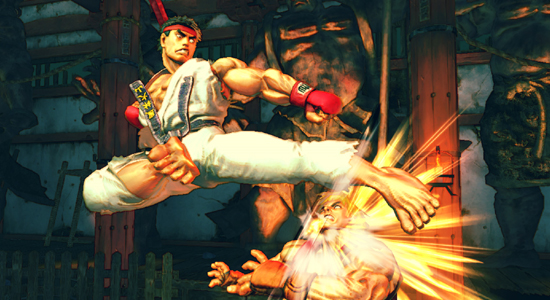 Between purists and casual players, Capcom strikes a balance.

he old-school king of fighting games finally returns with Street Fighter IV. With the newest edition to the series, Capcom has attempted to keep the hardcore fighting game purists happy while still keeping the casual players happy. For the most part, Capcom is able to strike that balance.

The full roster of fighters this time around consists of all of the original world fighters from Street Fighter II as well as four newcomers. Counting all of the unlockable characters, players have 25 in total to choose from, almost guaranteeing that you'll find someone whom you'll enjoy fighting as.

Characters' attacks and special moves remain the same as they were from Super Street Fighter II, ensuring that even for those with a passing acquaintance with the series should have no trouble at all picking things up. For the more dedicated players out there, the game offers three new additions to the series to mix things up.

The first is the EX attack. These attacks are tied to your super combo meter, so you can only pull them off if you have energy in the meter. EX attacks are more powerful than the regular version, and offer some enhancement from the original one — faster attack, adding in more hits to an attack, and even temporary invulnerability during an attack.

The second is the Focus attack. Performed by pressing both medium attack buttons at the same time, Focus attacks have two main benefits: one, they allow you to ignore one regular attack while they're being performed; and two, if they connect after being charged for a moment they can temporarily stun your opponent. Focus attacks really add to the tactical play that goes on between expert opponents; and is something that more people should be taking advantage of online.

The third new addition is the Ultra attack. Similar to Super attacks from Super Street Fighter II, they literally are the ultimate attack in this game. Ultra attacks are tied to their own separate meter, filling when you take damage. The idea is that players who have a bad run in a match quickly get back on an even playing field. Among more professional players there is some controversy over this addition, as it's seen as though people who don't do so well are getting rewarded. Controversy or not, the Ultra attack is one more thing that people need to worry about when playing.

The graphics for the game are superb. Even though we're dealing with 3D models, now, they look almost exactly like the original 2D counterparts. The stages are also very well detailed. There is even some destructability to some of them, depending on where it is that you, or your opponent, hit the ground during a match. Everything looks beautiful while it's in motion; Capcom really pulled out all the stops to give us a next generation fighting game. Everything still plays out on a 2D plane, and despite some grumbling about some hitboxes, the game plays very well.

Music is also a strong aspect to be found in the game. There are plenty of remixed versions of classic Street Fighter themes to be found here as well as some new additions. The overall sound design really is quite strong.

As with anything, Street Fighter IV has its shortcomings. Capcom really did try to appeal to a wide of a range of players as possible giving players six different difficulty options to choose from in Arcade Mode. The only problem is that they all tend to feel the same. There are plenty of occasions where even on the easiest of difficulties, people will find the computer completely destroying them. This becomes very noticeable with the final boss, even though you expect the final boss in a fighting game to be cheap and tough to beat, Street Fighter IV's Seth is something else. There were literally situations where on the easiest difficulty I was unable to land a single attack on him. Something went seriously wrong when it came time to make sure that the difficulty levels were weighted properly.

Play Arcade mode while
you wait for online matchmaking.
And wait. And wait.Another issue is found online. With any fighting game, the social aspect — taking on human opponents — is going to be a natural component. But in Street Fighter IV, getting matched with opponents is a bit difficult at times. This is mostly due to a lobby system that only allows two people to connect in a lobby at any one time. This is a big disappointment when compared to what players were given in the XBLA Street Fighter games. What this unfortunately means is that you're occasionally going to have a hard time getting into a match because lobbies end up getting filled so quickly.

But it's not all frustration. When you do manage to get into a game, things are going to be completely smooth and stable. In the hundred or so matches that I've played only two were so laggy that the whole game was dropped. This is great news, as any fighting game these days needs to provide a solid experience online. And you can be matched with people while you're going through Arcade Mode. This definitely takes away some of the stress of not being able to find a game, since you're still at least playing, and not wasting time waiting to find an opponent.

Street Fighter IV is a welcome addition to the series. It has something that will appeal to fighting fans of all skill levels. For those who haven't played a fighting game at all, this is definitely one to try, if only to find out why so many people have fond memories of player a Street Fighter game.