Professor Layton and the Curious Village on Game and Player Professor Layton and the Curious Village

Just what puzzle junkies have been hoping for?

rofessor Layton and the Curious Village, a puzzle game for the Nintendo DS, offers many opportunities to use your stylus as well as your noodle as you solve several brain-teasing mysteries. I won't lie — my expectations for Professor Layton were already very high due Level-5's clever marketing techniques. While reading a magazine I came across an ad for the game that challenged me to try my hand at a sample puzzle. The advertisement I saw that day not only stumped me, but also successfully determined my next purchase. If you do not think the Nintendo DS is capable of much, you'd better think again. If you were already aware that the little handheld packed a punch, prepare to be seriously surprised anyway. 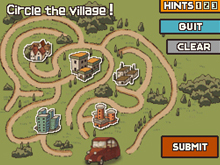 You, your apprentice
— and a strange, little village.
This little gem opens up splendidly with full-motion animation and voice-acting that won't cause you to reach for your sound button. As you quickly learn within the first few moments of game play, Professor Layton and his young apprentice Luke are on their way to a strange village to solve a mystery involving an inheritance problem. While the story does not instantly grab your attention immediately, the plot evolves and thickens as you play through several "chapters."

I was happy to see that my stylus pen was not going to remain tucked inside my DS this time; there was plenty of reason to touch just about everything. You are encouraged to tap all over your surroundings to uncover hidden puzzles and hint coins. Finding hint coins practically becomes an addictive game all in itself. Run out of hint coins, and you could find yourself completely stumped on a puzzle.

I was appreciative to find that I could save the game whenever I wished, and if I could not solve a puzzle I was given the option to try it again later at my own discretion. At the end of each chapter, any puzzle that you had not uncovered is saved. Unsolved and undiscovered puzzles go into the House of Puzzles, where they will remain if you wish to back track and try them again.

While I enjoyed the whimsical European charm the characters and setting provided, I occasionally grew slightly tired of the music. I liked the music, it was relaxing and the melodies were unique — but it was on the cusp of repetitive from time to time. Redundant music aside, I also noticed I could only play the game in short spurts. Sometimes I picked it up for ten minutes, other times for forty. This had nothing to do with how much time I did or didn't have to play the game, but rather how much patience I had. 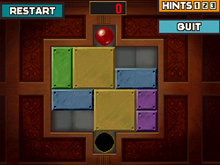 Stymied? Save puzzles for later.The puzzles are definitely hard. They would either make me feel really good about myself or make me feel as though I was dumbest person on the planet. I reeled through several emotions, from the agony of defeat — "No, I was so sure the answer was four! Why can't I get this?" to the jubilation of victory — "I knew I was always much smarter than I give myself credit for."

Whether you crave something to play while you wait for the bus, or something you can seriously sink your teeth into, Professor Layton delights in numerous ways. Those who are easily frustrated may wish to look elsewhere. But, intended for all audiences, the good Professor may be just what puzzle junkies have been hoping for.

Professor Layton and the Curious Village

The Fury of the Sunwell: WoW's Latest Patch