I wanted to play "lawyer" and wasn't disappointed: case closed.

n the wide and wonderful world of video game content one can expect to find adventure in countless exotic and unusual climes, both real and imagined. The freedom of our hobby allows developers to transport the player anywhere within the realm of imagination. It 's not uncommon to find some of the best action available set in wildly exciting new worlds; worlds created specifically for the purpose of immersion and exploration. Few can deny the excitement to be found in the unknown of fantasy, but does that mean there is none to be found in the gritty realities of the world-that-is? Must a good mystery involve space-folk and alien-types to thrill our jaded souls? Capcom would have you believe that the basic, earthbound courtroom can still host some of the greatest battles available, and they've sent Apollo Justice: Ace Attorney to present their case. 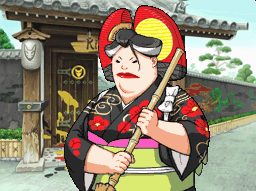 Think lawyerly.
When I first picked up this title, before I had even opened the case, I found myself flashing back to my first happy sleuthing days, wading through crime, grime, and time as I sought to put the collar on that slippery Carmen Sandiego. This style of puzzle game always came with a particular sense of satisfaction as I successfully completed each chapter. I enjoyed sharpening my intellect as I pared away the fluff from the definitive fact. Putting the cases together piece-by-piece was as enjoyable for me as those model airplane kits must have been for the more coordinated kids. Given what I knew about Apollo's predecessor, Phoenix Wright, I fully expected to tap into that same vein of excitement here. I was not disappointed.

The game is broken into several episodes, each centered around a new and seemingly unrelated trial. Your task, as newly appointed defense attorney Apollo Justice, is to sift through the facts, protect your clients from false accusations, and ultimately win for them a verdict of "not guilty." Every trial involves witness testimony, cross-examinations, and presentation of supporting evidence gleaned from the various locations and crime scenes. As the player becomes increasingly comfortable with the format of each stage the trials become more complex. Multiple witnesses and larger evidence caches make for deeper levels of mystery and intrigue. Asking the right questions and providing pertinent evidence can advance your cause in the eyes of the judge, but misuse of his time will wear his patience thin. Should you make too many mistakes in your examinations, the judge will eventually lose his cool, resulting in an early verdict for your poor client.

Based as it is in legal banter and verbal testimony, a large part of Apollo's job is sifting through text. Because the DS's tiny screen can hold no more than a few lines at a time, the player must constantly tap the screen to skip through each conversation, some of which are quite lengthy. The developers' attempted to combat the monotony with light-hearted humor and a surprising amount of pop-culture references, but despite their best efforts I still occasionally found myself rapidly tapping in frustration as I waited for the game to get to the point.

Also frustrating were the spotty case construction and progression of each trial. The stories themselves were well conceived. Every character, motive, and scene was thoughtfully established and connected. I highly enjoyed seeing calm and composed witnesses and testimonies gradually fall into panic and disorder as their lies were exposed one by one. What I did not enjoy was the slightly sloppy evidence presentation scheme. At various times during trials, the defense is given the opportunity to present a single piece of evidence to support their claims. In many situations, multiple pieces of evidence would do the job equally well. I often found that the evidence I chose to present was not the specific piece needed at that particular moment. Having to employ the trial-and-error method detracted slightly from my satisfaction in building an airtight case. I was also often frustrated with the prosecution's ability to pull new evidence out of thin air, conveniently disclosing proof I did not have access to before. 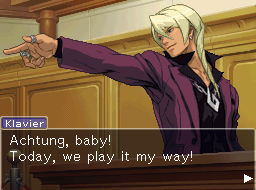 Leave ex nihilo to the
philosophers, please.The worse offender in this instance happened to be the late, great Phoenix Wright himself. Established early in the game as Apollo's mentor, Mr. Wright constantly had the air of an insufferable know-it-all, withholding the truth and forcing Apollo into many situations unprepared. Few things are as annoying as the feeling that someone knows all the answers and that they're dangling them over your head like one would offer a chew toy to a puppy.

Aside from these small detractions, my overall opinion of Ace Attorney was a very positive one. The tension of the courtroom and the challenge of the defense were very much in effect. The controls were simple and intuitive and the ability to verbally object made for a few fun moments. In fact, if I didn't enjoy the game so much, the drawbacks would not stand out so much in my mind. I would recommend this game to any with an inquisitive mind and a patient soul.