The triumphant return of the series that put PopCap on the map.

aunched in web browsers way back in 2001, Bejeweled was at the forefront of the casual game movement, helping expand the typical gaming demographic and thrusting developer PopCap Games into the limelight.

It's been five years since the release of the last true title in the match-three puzzle series, but Bejeweled 3 is finally here. Though the game retains the core conceit of forming sets of three matching gems in order to score points, PopCap has gone above and beyond what you might expect. While it could've easily pumped out a straightforward sequel with a few aesthetic changes, the developer has instead provided a creative and substantial package, which is arguably the new definitive version of Bejeweled.

Series fans will recognize a few standard game types from the outset. The typical stage-based and untimed Classic mode returns, playing much like you'd expect. Action mode returns in all but name as Lightning mode, asking you to race against the clock to earn more time whilst shooting for high scores. 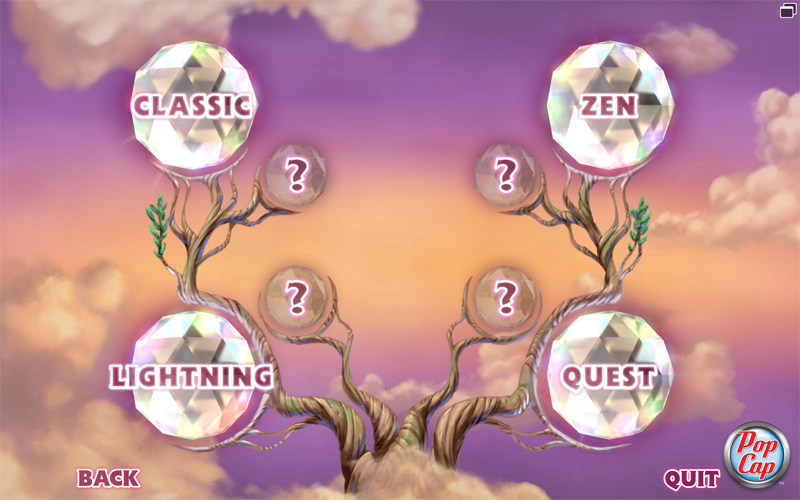 So much to do: PopCap has gone above and beyond, providing a creative and substantial package.Endless mode also makes a similar reappearance, this time under the Zen moniker. The basic game play is the same as it was in Bejeweled 2 though now you have a number of options to help you relax and achieve a zen-like state of play. Ever wanted to match-three to the ambient sounds of a waterfall whilst regulating your breathing patterns and being fed positive textual affirmations? Now you can.

The game features four unlockable secret modes, which end up being some of the most creative ones in the game. For instance, Poker requires you to create appropriate hands of cards from matching gems whilst Diamond Mine has you digging progressively underground as you make matches at the bottom of the game grid.

As if those seven ways to play weren't enough, Quest mode provides even more variety. Loosely structured around Bejeweled 2's Puzzle mode, Quest is made up of stages that require the player to beat a set amount of bite-size challenges in order to progress. These tasks are comprised not only of the other seven main modes but also a heap of other equally creative ones.

Quality is often sacrificed in favor of quantity in games but I was pleasantly surprised with every new game-type I came across in Bejeweled 3. While every one does indeed revolve around matching three or more gems together, each has its own unique wrinkle that forces players to rethink their play strategy. PopCap has shown an impressive amount of imagination here, providing more variations on a theme than I personally thought possible. 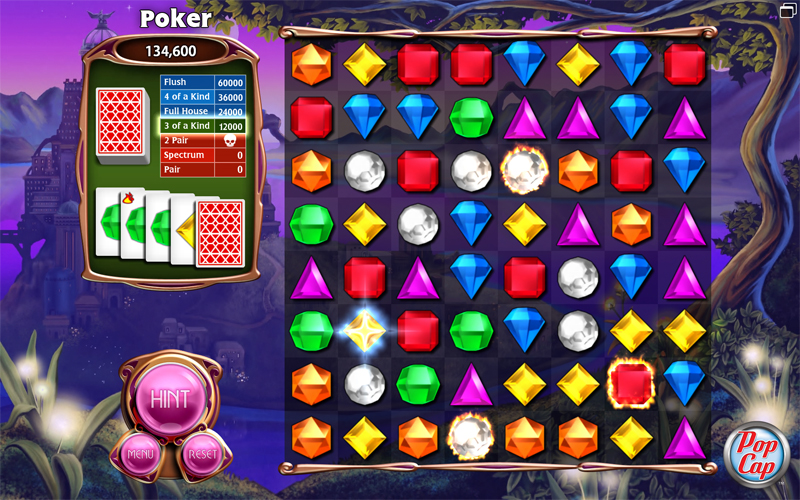 I was pleasantly surprised with every new game-type I came across.In terms of graphics and presentation, gaming has come a long way since Bejeweled 2 launched back in 2005. Thankfully, Bejeweled 3 has adapted with the times and provides sharp, high-resolution graphics and widescreen support. The game also leaves its predecessor's outer space aesthetic behind, introducing fantasy themed backgrounds and music, which help give it its own identity.

As seems to be the standard these days, the game also has a progressive leveling system, stat tracking and an achievement equivalent for those looking to squeeze every last drop of entertainment from the package. The only problem is that none of this is online-enabled — meaning you can't compare these scores and stats with other players. This continues to be a complaint across all of PopCap's games, one that prohibits the often-addictive one-upmanship that comes with competing with others for high scores.

Despite this one niggle, PopCap has done a tremendous job with Bejeweled 3, having taken the aging match-three formula and building on it in a number of imaginative and surprising ways. The result is the biggest and best version of the game so far. It goes without saying then that Bejeweled fans shouldn't hesitate to pick this one up. For everyone else this comes highly recommended.