Gaming with big game on the savanna.

et's be honest with ourselves — while users of Apple's app store may have downloaded more than 5 billion applications to date, the vast majority of those are complete and utter crap. For every Shazam there's a horrific free source navigation tool or repository of poisonous recipes. The fact of the matter is, anyone can write an application using Apple's SDK. The level of disparity between independent productions and professional releases can be downright mindboggling.

Nowhere is this highlighted more than in the games available for the iPhone and the iPad. While a number of developers have excelled at creating unique and inspiring entertainment for Apple's portables, far too many of the titles available seem like college projects gone awry. Of course, that doesn't mean that you won't occasionally stumble upon an independent release that's fun, or dare I say it, actually good. Despite my misgivings, Slingshot Safari, the latest from developer Digital Prunes, is just such a production — a simple, entertaining mobile game that does a great job of highlighting its platform's strengths. 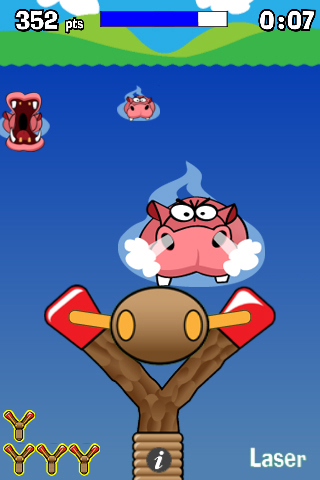 Everyone's having fun. But not the hippopotamus...Slingshot Safari's premise is simple enough: hit the savanna in search of prey, wracking up plenty of points along the way. What the game lacks in political correctness it certainly makes up for in fun — it's hard not to giggle when a wildebeest plops head-over-heels following a crack-shot. Digital Prunes may need a lesson or two about what animals are fair game, but I highly doubt anyone's going to be too offended considering Safari's sugar-coated presentation. Still, I can hear my nephew now: "But I don't WANT to shoot the monkey!!!!"

While Slingshot Safari is accessible, its controls will certainly take some getting used to. A laser sight (which is basically on on-screen arc that illustrates your bullets path) assists beginning players, but most will quickly want to turn it off in order to attain higher scores. iPhone tilt detection brings a healthy degree of control to the game's shooting action: adjust your angle, pull back on the sling with one finger and release. It's that simple. With practice, you'll begin to recognize exactly how much to pull back on the sling and how much to lead moving targets.

A simple menu system and two play modes complement Slingshot Safari's fun design and game play. Short of a few crashes (which never occurred during play) and moderate loading times, the only thing I can find fault with is Digital Prune's decision to use Plus+ as its social networking tool. There seem to be as many gaming social networks on the iPhone platform as there are games — a little consolidation and easier player access would be much appreciated.

All told, Slingshot Safari is everything most players want from a mobile game. It's just the thing for a quick train commute or a sit in the doctor's waiting room. It's not every day that we see a developer bring both a great interface and charming art to an iPhone game. Digital Prunes has provided us with both, and the result is easy to recommend.