A huge game in a very small package.

evel 5 is quickly becoming one of my favorite developers in recent times. I've enjoyed every game I've played by these developers. Their latest title, Dragon Quest IX: Sentinels of the Starry Skies, is no exception. It's the newest to enter the canon of one of the longest-running RPG series in the history of video games. It's the first in the main series to debut on a handheld system and also features a multiplayer mode.

Dragon Quest IX tells the story of a guardian angel who, after some good deeds and a shocking twist, falls from The Observatory and becomes partially human. The hero meets a fairy some time after who drives a celestial train called the Starflight Express that can ferry people to and from The Observatory. You soon learn that several magical fruits fell from Yggdrasil, the world tree, and you must return them to restore the tree's power and get your wings and halo back.

You have some control over your hero's looks. You can choose to be male or female and can customize your hair, skin complexion, body type, and eye color. It makes sense with multiplayer mode; that way you won't have a bunch of clones running around adventuring together. After a short while into the game, you get to recruit more members into your party for single-player mode. There are some pre-generated characters or you can choose to create your own. When you create additional characters you can choose from one of the six starting vocations. The hero automatically starts as a minstrel. 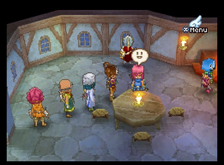 The vivid character design looks almost hand-drawn even though characters are 3D models.Eventually you earn the right to change your job. You start at Level 1 with each job, but the levels you gain remain with each job. One of the main reasons to change is that all of the skill points you earn carry over. You can easily max out a particular skill by gaining around 25 levels in two vocations. Other jobs are unlocked through various quests.

Multiplayer mode is not conveniently accessible. You cannot connect through Nintendo Wi-Fi. You can only connect locally with peers or with complete strangers by canvassing the area for connections.

Much of the tried-and-true elements of the previous installments to the series have returned, some improved upon. A lot of it reflects on innovations from Dragon Quest VIII, which was also developed by Level 5. The alchemy system is back and this time items are made instantly rather than having to wait and wait for the chime to sound. The tension system returns and brings with it a new coup de grace attack added. As I'd previously mentioned, the skill system also makes a comeback and is much better implemented through the ability to change vocations.

The game's graphical style is among the best I've ever seen on the DS. The vivid character design looks almost hand-drawn even though characters are 3D models. I've always enjoyed Toriyama's art from the beginning. The music is also good, catchy orchestral tunes, with a lot of themes carrying over from previous entries.

I only have one major complaint about the game: there is only one save file. No way to backup or anything, so if your data becomes corrupted or some fool decides to start a new file on your game, there goes everything. Other than that, it's definitely one of the best times I've had with my DS in a while. Dragon Quest IX is a huge game in a very small package with over 40 hours of gameplay and plenty of replayability if you can find some friends to adventure with you in multiplayer mode.