Everything old is new again.

ack in 2000, Pokémon Gold and Silver for the Game Boy Color were lauded for refining and expanding on the first Pokémon games, adding full color graphics, 100 new creatures, two whole regions to explore and a myriad of innovations and tweaks.

Ten years on and most of these improvement have become standard for the series, and as a result remakes HeartGold and SoulSilver aren't nearly as impactful.

And you know what? That's absolutely fine. HeartGold/SoulSilver is such a thoroughly enjoyable and finely polished experience that it's hard to begrudge its remake status.

It retains the simple yet deceptively strategic Pokémon gameplay that is easy to pick up yet hard to put down. Those with obsessive-compulsive traits will be particularly caught up in molding the perfectly balanced squad of beasts capable of decimating trainers, gym leaders, and friends alike. 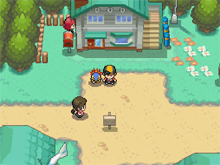 The game is such a thoroughly enjoyable and finely polished experience that it's hard to begrudge its remake status.The original Gold/Silver provided not only the brand new land of Johto to conquer but also the Kanto region where the original Blue and Red Pokémon titles were set. This almost doubled the amount of overall content, allowing players access to the creatures exclusive to this area of the world and the opportunity to become the Pokémon Champion of two zones. Both make a comeback in HeartGold/SoulSilver and reinstate all of the rare Pokémon not found in first Kanto revisit like Mewtwo. On top of the online functionality and features added since the release of the originals, this edition is a serious contender for the biggest game in the series, and maybe on the DS platform as a whole.

The crucial multiplayer elements remain, with battling and trading available both locally through wireless play and over the internet via the Nintendo Wi-Fi Connection service. The same suite of online features from the previous DS Pokémon games make a return, adding a substantial amount of content that wasn't available nor possible when the original Gold/Silver were released. The Global Trade Center provides a fantastic system for hunting down hard to get Pokémon, whilst trainer ghost data, leader boards, battle replays, and mini-games can also be downloaded or enjoyed with others. Battling with chums via the service does require using Nintendo's unwieldy friend codes but is otherwise robust, though apparently no one likes to play with strangers as I've yet to find any random players up for a fight.

The Pokéwalker: transfer one of your creatures, and when you go out for a stroll they'll gain experience, level up, and more.New copies of the games come bundled with the Pokéwalker, a separate device somewhat reminiscent of the LCD digital pets popular in the late 90s.

Using a pedometer it gauges the amount of steps the user takes and generates a certain amount of currency called watts. This can be used to play mini-games that can result in finding hidden items and even catching Pokémon. If you transfer one of your creatures to the Pokéwalker when you go out for a stroll they'll gain experience, level up, and may also discover items for you. You can also link-up with other Pokéwalker owners to unlock further goodies, a feature very similar to Gold/Silver's old Mystery Gift function.

While this gadget may seem gimmicky at times (the concept of extending an already portable game onto another mobile device is a little strange), anything that provides a way to earn in-game benefits during downtime is definitely a plus, especially if it involves something as positive as exercise.

Unless you've grown weary with the fundamental Pokémon experience, I can't think of a reason not to check out HeartGold/SoulSilver. Nintendo has done a superb job of updating what many already considered to be the best in the series, offering both audio-visual and feature parity with their most recent offerings. Okay, so there's nothing fundamentally new here. But given the obsolete format of the original games and the sheer quality of what's on offer here, this is a trip through Pokémon history worth taking.