Demon's Souls on Game and Player 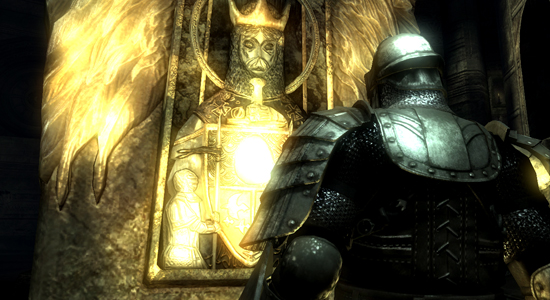 Up for a challenge?

hen I first put Demon's Souls into my PS3, I wasn't quite sure what to expect. I know the developer, From Software, had created some of my favorite games for PlayStation 2, the Armored Core series. From's first game, of which Demon's Souls has been tagged a spiritual successor, was the unrelenting King's Field for the original PlayStation.

Demon's Souls takes place in the kingdom of Boleteria. A dark mist has surrounded the kingdom, bringing with it powerful demons which have taken over. Many so-called heroes have tried venturing into the demon-infested lands and rid them of the evil but all have failed. Your character is one of these heroes.

Well-earned rewards: face off with challenging monsters big and small.

I found character generation in this game odd. There are basic choices like name, gender, and class. You choose from one of ten classes, the only real difference between any being your starting equipment and statistics. What got me is you have the option to fully customize your character's face. I never quite understood why, in a game where the camera does not face your character nor do you interact with other humans, you would want to spend time customizing your character's face. Perhaps some kind of personal attachment or self-satisfaction in knowing just how ugly you can get?

The first time you play, you're required to play through the tutorial (in each subsequent game you have the option of skipping). Enemies in the tutorial are much easier to overcome. It's there to get you used to the game's control scheme. At the end of the tutorial you are struck down by a giant demon you have no hope of defeating. After being killed, you arrive at the Nexus in soul form. You cannot escape the Nexus. You can only reclaim your physical body by defeating a boss or using certain items.

In the Nexus there are five waystones that lead to different areas of Boleteria. At first you can only enter the Boleterian Palace. The only way to progress further into the game is to defeat the boss at the end of this first stage. Easier said than done. The first time playing through you will more than likely die several times. After facing off with the first boss, the rest of the waystones and the option to level your character are unlocked.

May as well be useful: read messages left by other player-characters' ghosts.So off you go to each of the five areas, using axes and swords, bows, or even magic. Every enemy killed will drop a certain amount of souls. Souls are used for several things: buying items, upgrading and repairing equipment, and leveling your character. Whenever your character dies — as is often the case — he leaves a bloodstain, along with all collected souls, in the spot in which he was killed. The key is to memorize where enemies are and develop a strategy for killing them. When you find the bloodstain you can reclaim lost souls and carry on.

There is an online mode with Demon's Souls, but interaction with other players is limited. When your character dies, you can leave a message with his bloodstain. Hints and tips can be left for other players to utilize to try to make it through the game easier. You can also watch ghosts of other players to see what actions their characters took right before their death.

Demon's Souls is definitely a game geared toward more hardcore players. Any casual gamer would likely give up within an hour or two. The game doesn't offer any hints about what you need to do, where you need to go, how to defeat the bosses, or what evil lies around every corner. Those of us who like punishment and a good challenge will keep driving on. Demon's Souls is unforgiving but it's very rewarding when you take down one of the monstrous bosses.

Difficulty aside, the title looks like fun. And its milieu reminds me of Oblivion, which is enough of a compliment.

I have been following this one for some time now, seeing western review persepctives has been interesting. It seems like a big 3D Roguelike, and I have been quite taken by the notifications of impending doom left by fellow players.

From my time with my imported copy I can attest to the shear difficulty of the game. I've also been quite captivated with the online message system. There's just something that's both useful and devious at the same time. There are quite a few people out there who get a kick out of leaving false messages, and once you run into one of these you'll be left wondering if the rest of the messages that you see really do have the meaning that they state.

I also liked seeing the ghosts of other players moving around the levels once you clear the tutorial area. Kinda gives the impressing that you're not completely alone, but you still have to overcome the games obstacles by yourself.

I have to agree with Gary: I get a real Roguelike feel from this game. When you fall in Shiren the Wanderer for the DS, you pray that some online player will come to your rescue so that you may salvage your earnings.

In Demon's Souls the player gets one chance to save themself -- I like that better.

Interesting, as of this posting there's only 3 people who've beaten the game thus far.

Man, that's a really odd review... One of the greatest things about this game is actuaaly the interaction with other players ("interaction with other players is limited") and it ISN'T limited. You can summon players to help you in your main task or invade other player's world to kick him in the teeth and regain your body form as a reward or ask for a fair fight on a 1v1, you can leave messages on the floor so you may help other players warning them of the incoming danger and the bloodstains as you said. Besides, that's a really interesting score board where, if you're addicted enough, you can try to fight your way to the top.

In my opinion, Demon's Souls is one of the greatest RPGs of all time.

I agree with Jebus, ive been playing demon souls for 2 months now, and i have forever recieved countless occaisions were i have had blue phantoms by my side or a black phantom has invaded my world or ive invaded theirs. eitherway online interaction is NOT limited.

However, online communication is a different story, You cannot use a microphone or type to anyone in-game, but you can use your PSN to find the player and message them through there, which may be abit difficult when your typing "theres a black phantom in the ro-" *dead*. Obviously the game has been out for a little while now, so far more than 3 people have completed the game (me included).

The character customisation in looks... i have to agree. its very rare people see the changes unless the changes are bluntly obvious like you change your skin to be a bold red or blue color.

Oh btw people, at the start, the demon is DIFFICULT not impossible (im referring to the axe wielding boss on the tutorial level), i managed to kill it, but it was very hard and could not be done wearing heavy armor, full mobility is needed.to keep out of its attack range. but it is worth killing it, as it takes you to another place which you confront the dragon god for the first time, whilst you collect grass and souls (approx 5000 souls) which is a very healthy start.

Generally, i find this review very bias as it is commenting on his own views on the differet functions of Demon Souls. I could say that "character customisation regarding stats was fantastic" but others would think its a bad idea. However the review did show what functions Demon Souls has to offer, as well as the sheer ruthlessness of the games nature.

Thanks for the input, fellas. I'm not sure if you'll ever read this (maybe you will) but I assure you the online interaction was VERY limited because you have to remember we're not always playing the retail version of games. I could only even connect to the online version of the game one time out of the entire time I played it before reviewing.

The game can be quite difficult. The population dies down quite a bit once you've completed and moved on to the quite ridiculous NG+ (New Game plus) where everything hits at least 4 times as hard. As for online, I just down right love black phantoming as well as thwarting the plans of an invading black phantom. The game is quite "easy" the first play through in comparison to trying to complete a second... and third time as the game, like I said, just becomes more and more ridiculous with a difficulty increase. I personally love the game. I've been looking for a game that I could "hard" and I've found it.