Final Fantasy Crystal Chronicles: My Life as a Darklord on Game and Player 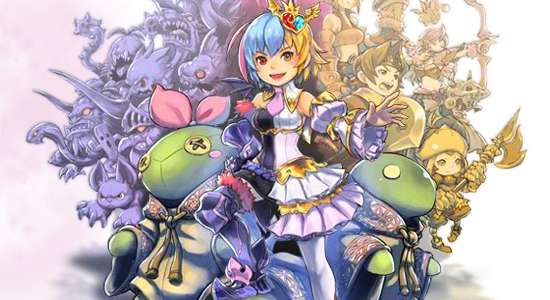 Final Fantasy Crystal Chronicles: My Life as a Darklord

he Final Fantasy spin-off series Crystal Chronicles began life on the GameCube, establishing itself as a multiplayer-focused dungeon crawler. While two DS games and a Wii follow-up continued that ethos, the series didn't stay standing still for long, with 2008's downloadable release My Life as a King switching the emphasis to kingdom management. Now, the series branches out again with My Life as a Darklord, another Wiiware entry that takes place chronologically after King, though it once again completely changes the nature of the game.

You play as Mira, daughter of the Darklord who was defeated in the previous game, intent on once again striking fear into the world on behalf of her beleaguered father. Since you're now in the shoes of the bad guy, the same adventurers sent out in the previous game are out to ruin your fun and it's your job to hold them back.

The game is unique blend of tower defense and building management, somewhat of a cross between Desktop Tower Defense and Simtower. The goal of each level is to survive waves of adventurers raiding your building, defeating them before they can reach the top of the tower and putting you out of commission. A rock-paper-scissors system of melee, ranged and magic attacks defines the basic strengths and weaknesses in the game, so it's essential you populate your keep with the relevant fortifications. While the fundamentals may sound simple, there's a surprising amount of depth here especially for a tower defence game, with the large variety of enemies, minions and floor types allowing for many different defensive strategies.

Levels are fast and action-packed, with each lasting only a handful of minutes depending on how well-designed your building is and how many waves of adventurers are set to pay you a visit. It's also quick and easy to manage your tower, using just the d-pad and the 1- and 2-buttons on the Wii remote to navigate a streamlined drag and drop system. On the whole, Darklord is great for short bursts of play, but it's also fulfilling enough that you may well find yourself getting addicted and playing for hours at a time.

Many critics took issue with predecessor My Life as a King's price model, its basic price of 1500 Wii points making it one of the most expensive titles on Wiiware. Furthermore, a hefty amount of content that was locked away behind overpriced downloads.

Unfortunately, My Life as a Darklord uses the same format and at an even bigger detriment to the game. While initially going easier on your wallet with a 1000 point price tag for the base game, downloadable content can cost from 200 to 500 points, meaning after a few purchases you can easily spend two or three times the amount you paid for the actual game. In fact, if you calculate that the total cost for all seventeen currently available items it comes to a mind-boggling 5200 points, which is $52 or £36.40 in real money.

A unique blend of tower defense
and building management.Granted that no one is going to want to buy absolutely every piece of it, but to put that into perspective, you could buy five full Nintendo 64 games on Virtual Console and still have 200 points leftover. Some of this large catalog of DLC even grants you extra abilities and resource boosts, essentially allowing you to pay more to make the game easier. Overall, this typifies the worse type of DLC, locking away items, abilities and what amounts to difficulty settings (some might say cheats) that should have been in the game to begin with.

It's a real shame that the something that should be as trivial as downloadable content hampers My Life as a Darklord, though beneath this cynical, money-grabbing model lies a really entertaining experience that puts a new twist on the tower defense genre. It's fast and simple management game play provides a more visceral and downright fun experience than its predecessor, ending up being a really good fit for Wiiware. But unless you plan on spending significantly more than the initial price of the game, you may want to save your Wii points for another more complete experience.

Final Fantasy Crystal Chronicles: My Life as a Darklord