He who fights with monsters should look to it that he himself does not become a monster . . . when you gaze long into the abyss the abyss also gazes into you . . ." — Friedrich Nietzsche

A fitting quote to open one of the most groundbreaking and influential RPGs on the PC. Baldur's Gate, released in 1998, was truly a breath of fresh air among the first-person dungeon-crawl genre most previous Dungeons & Dragons games had fallen into. This game was well received critically and spawned an expansion, a sequel (with expansion), and many other titles using the popular Infinity Engine developed by BioWare. 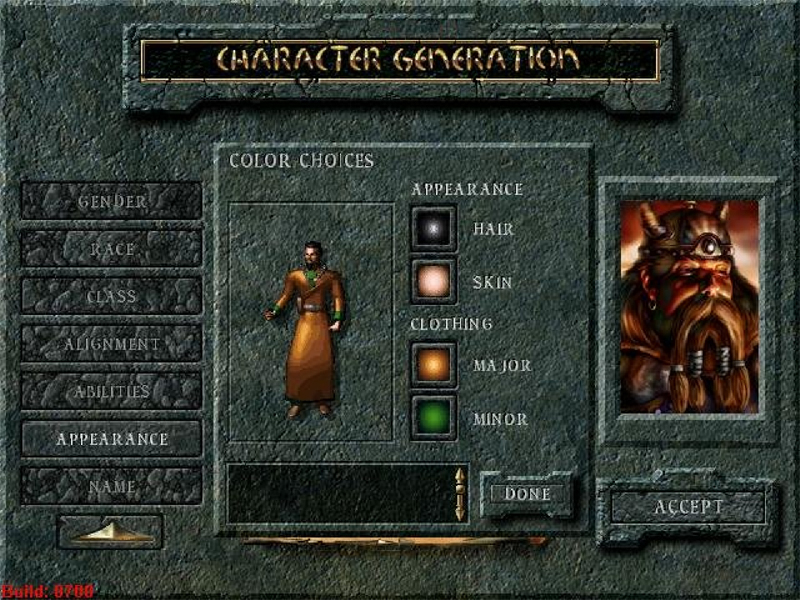 Build the hero with a
very detailed character
creation system.Baldur's Gate begins in Candlekeep, a fortified library on the Sword Coast in the fantasy world of Faerûn. The hero of the story, either a character the player creates through a very detailed character creation system — or one of the several pre-generated characters — is an orphan raised by Gorion, a powerful mage with high influence in Candlekeep. Your world is turned upside down when Gorion demands you ready yourself to leave your home and safety to make a long and dangerous journey. After a short scene witnessing the death of your guardian, you are left on your own in the wide-open dangerous world. Your childhood friend, Imoen, approaches you and offers to join on your quest, as she knows what has happened. Thus begins your epic journey.

Dungeons & Dragons is a game of skill and chance and Baldur's Gate does an excellent job encompassing the D&D experience. Any single character in the game will not have the proper skill to overcome every obstacle he will come across, so it is imperative you join with a variety of comrades to complete the experience. It's a good idea to have those fitted for combat, a thief who can disable traps and pick locks, a healer, and a mage to identify magical items and weaken the enemy from the back row with powerful spells. Baldur's Gate offers a wide variety of NPCs from all walks of life. Your alignment will affect who you journey with. A chaotic evil mage will definitely not get along with a lawful good paladin.

Baldur's Gate is a huge game with a lot to do. Trying to do it all can easily log over 60 hours of gameplay, if not more. Like most CRPGs, quests are important for gaining experience and magical items that will aid in completing the main storyline.

The main storyline of the game takes you through a compelling series of twists and turns, from simple troubles in the iron mines near Nashkel turning into a sinister plot with your own character's ancestry and a long-lost relative over seven chapters. The choices you have to make in the game affects your life so profoundly you have visions in your dreams that unlock part of your potential power, from where you find out near the end of the game. 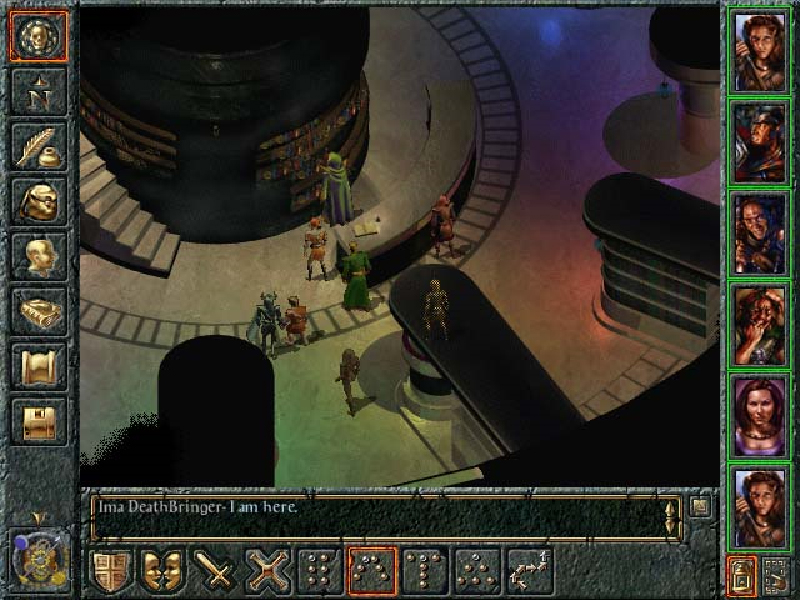 It's an early adopter
of multiplayer.The action in the game is largely real-time, but allows the player to pause the game for dealing with encounters more strategically. Another key part of the Infinity Engine was the graphical user interface. You could access your journal, where records of your quests and important encounters are kept, character sheets, inventory, spell books, and the main game screen. The bottom part of the GUI held the dialog box and a series of hot keys for important actions and specific skills.

Baldur's Gate is also an early adopter of multiplayer gameplay. You can connect with friends through several protocols to play the adventure as a group. Up to six players can join a game, but you also have the option with less players to make multiple characters or use NPCs to fill out your party. You could also fly solo and create your own six-man party if you want to have characters with a specific set of skills.

Baldur's Gate was a huge success in the Dungeons & Dragons computer RPG realm and continues to be an excellent game after over a decade. Make way, evil! I'm armed to the teeth and packing a hamster!